I’m going to make a small “sub-series” in the “Elvis in Charcoal” series, The Movies.
33 drawings with images and the titles of the movies in them. There is also a bit of color in them.
I always loved letters, maybe because of my background as a graphic designer. Most of my non-elvis related work contains lettering, check it out here.

The first movie drawing is Loving you, below a photo of the work in progress and the end result. 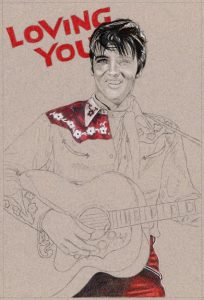 Loving you was the second movie Elvis made and was released in 1957.

Loving You is a 1957 American Technicolor musical drama structured as Elvis Presley’s first starring film vehicle, following his debut the previous year in a supporting role in the black-and-white film, Love Me Tender. Directed by Hal Kanter, the cast is completed by Lizabeth Scott, Wendell Corey, and Dolores Hart in her movie debut.
The storyline, about a delivery man who is discovered by a music publicist and a country–western musician who want to promote the talented newcomer, was scripted by Herbert Baker and Hal Kanter, based on the short story “A Call from Mitch Miller.” Kanter expanded the script after being inspired by Presley’s last appearance on the Louisiana Hayride, and his manager Colonel Tom Parker’s antics.
A box office success, Loving You opened nationwide on July 9, 1957. Paramount Pictures chose to ignore the first-run theater system, opting instead to release the film in sub-run neighborhood theaters, a system later dubbed the “Presley Pattern.” Composed by Jerry Leiber and Mike Stoller, Presley’s single “(Let Me Be Your) Teddy Bear” backed with “Loving You” was certified platinum by the Recording Industry Association of America. 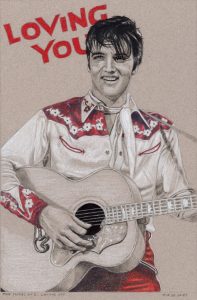