Skip to content
HomeElvis in charcoalElvis in Charcoal #160, The movies #4 King Creole 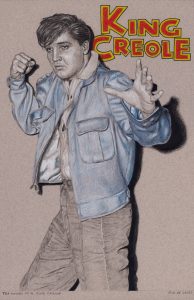 The third drawing in “The Movies” series is finished too.
This time it’s a drawing of the movie “King Creole“. One of his best movies.

Nineteen-year-old high school student Danny Fisher (Elvis Presley) works before and after school in order to support his father (Dean Jagger) and sister Mimi (Jan Shepard). After Danny’s mother died, his grieving father lost his job as a pharmacist, and moved his impoverished family to the French Quarter in New Orleans. At work one morning, Danny rescues an older woman, named Ronnie (Carolyn Jones), from her abusive date. After a taxi ride to Danny’s high school, she kisses him. Danny responds to some schoolmates’ teasing by kissing Ronnie back and then punching one of them in the face. That earns him a trip to the principal’s office. Miss Pearson (Helene Hatch), his teacher, tells Danny that he will not graduate. Principal Mr. Evans (Raymond Bailey) is sympathetic, but powerless to help, so Danny decides to drop out of school.

When he leaves the school grounds, three young men take him into an alley. Their leader, Shark (Vic Morrow), wants revenge for Danny hitting his brother. Danny defends himself so well that Shark invites him to join them. Later, Mr. Fisher tries to convince his son to stay in school. Instead he helps Shark’s gang shoplift at a “five-and-dime” by singing “Lover Doll” to distract the customers and staff. Only Nellie (Dolores Hart), a young woman working at the snack bar, notices his complicity in the theft, but she does not turn him in. Danny invites Nellie to a fictitious party in a hotel room; finding nobody else there, she starts crying and leaves after admitting that she still wants to see him again, but not under those conditions.

That night, Danny meets Ronnie again at “The Blue Shade” night club, where he is working. At first, she pretends not to know him, as she is accompanied by her boyfriend and the club’s owner, Maxie Fields, aka “The Pig” (Walter Matthau). When Maxie does not believe her, she claims she heard Danny sing once. Maxie insists that Danny prove he can sing. His rendition of “Trouble” impresses Charlie LeGrand (Paul Stewart), the honest owner of the “King Creole” club, the only nightspot in the area not owned by Maxie; he offers Danny a job as a singer.

Meanwhile, Mr. Fisher gets work as a pharmacist in a drug store, but his boss, Mr. Primont (Gavin Gordon), is constantly demeaning him, much to Danny’s embarrassment. That makes it easier for Danny to go against his father’s wishes and take Charlie’s offer. When Danny is a hit, Maxie tries to hire him. Danny declines his offer out of loyalty to Charlie.

Shark, now working for Maxie, suggests to Danny they beat up Primont to help his father. When Mr. Fisher leaves the store dressed in Primont’s hat and coat (lent due to a rainstorm), Shark recognizes him, but decides to mug him anyway, as that would be even better for Maxie’s purposes. Danny’s father is so badly injured, he needs an expensive operation; Maxie pays for a specialist to perform it. Maxie later blackmails Danny into signing with him by threatening to tell his father about his involvement in the mugging, then does it anyway. Danny pummels Maxie for the betrayal and helps Ronnie leave him.

Maxie sends his henchmen after Danny. Shark and another gang member trap him in an alley. Danny knocks out one of his pursuers. Then Shark stabs Danny, but is himself killed. Ronnie finds Danny and takes him to her house on a bayou to recover. She asks him to forget her sordid past and pretend to love her. Danny replies that it would not be difficult and kisses her. Maxie drives up, accompanied by Dummy (Jack Grinnage), a member of Danny’s former gang. Maxie fatally shoots Ronnie. Dummy, who had been befriended by Danny, grapples with Maxie; the gun goes off, killing its owner.

Danny returns to the “King Creole”. He sings the lines “Let’s think of the future, forget the past, you’re not my first love, but you’re my last” to Nellie in the audience. Mr Fisher shows up to listen to his son sing.